I’ve seen enough films and television series’, read enough books and listened to enough people to know that dating at any time of life can be challenging. After all, it hardly takes a genius to realise that anything which involves other people is challenging.

But what I didn’t realise is what it meant to start dating again, or starting to date at all, at twenty-four.

It’s no secret that if you follow me on social media platforms you’ll be aware I’ve just gotten out of something messy. The first serious break up, I think. And it has been hard. It’s still relatively fresh. But I’m starting to have more good days than bad again. More moments of peace than stress. That is a start.

But this week, in the name of progress, I decided to accept an invitation for what I referred to as a non-date-date. We went for a walk on a Spring evening. And it was lovely. He was easy to talk to and I had fun. Maybe it was too soon for me to start dating, but then who decides when the right time is? Me and me alone.

It might have been the first time in any kind of relationship (albeit only a potential beginning of one) that I’ve had where I have truly respected my own boundaries. I left when I wanted to, rather than sticking it out. I stayed true to myself in so many other ways and I am damn proud of that. It is the first time in a long time that I feel I’ve put myself first.

But what I wasn’t ready for was the conversation about kids and future family planning. I’m always really honest about the fact that I have no intention of being a mother – and this particular conversation came up as he is a primary school teacher. I never have had an interest in becoming a mom and as I’ve gotten older, I’ve only become surer of that fact.

I can accept the argument that I might change my mind, as much as I hate hearing it sometimes. Because sure, I might. We’re human beings and we’re fickle in lots of ways. But I’m as sure as I can be that I won’t. I feel very strongly about not wanting to have children. I frequently get the argument that I’m still young and I’m ‘only twenty-four’. But twenty-four didn’t feel all that young this week. I’m not saying it’s old – not by a long chalk – but this particular date didn’t make me feel as though I had all the time in the world left.

I suppose I wasn’t ready for the possibility that at twenty-four, I would now have to start setting the fact that I didn’t want to be a mother as a precedent very early on in any relationship. That I would be turned down because children were a part of someone else’s life plan. And it’s not that it’s wrong to want children, just like it’s not wrong for me not to want children. But it shocked me all the same. I didn’t think I was at that time of life already. It felt too soon to me.

Sometimes I think about the fact that I am now the age where my mother had me and sometimes that scares me, and sometimes I expect the desire to raise children to kick in. But it doesn’t. And the fact remains that the urge will probably never kick in – and I am more than okay with that. I’ve been thinking about it a lot this week in light of my first (not a date) date in a long time. It occured to me that I hadn’t realised other people would be ready to look to settle down and think about children at 24. I thought I had more time before this became an issue.

Sometimes it feels like there is so much pressure. And I’m tired of justifying why I don’t want children. What I actually want is to donate my eggs. I want a career (not that I’m suggesting you have to choose; I am surrounded by so many women who do have both! But I seem to feel compelled to use that as justification. It’s truly odd that we’re made to feel we need to justify the decision). There are so many things I haven’t got figured out yet – which is okay, no matter how old you are.

But I think the absence of that desire, that want, that need, to become a mother and raise little lives into big deals… that felt like a disadvantage this week. It was put across nicely and I appreciated that the ending came early, rather than after a potential emotional investment. But it also very much felt like I was flagging behind for a moment. Like perhaps I wasn’t in the same position as lots of other people my age. Being surrounded by mothers, and parents (mostly on social media), can sometimes feel like a lot of pressure. But I’m never going to be in the same position as them.

I am not criticising anyone for knowing they want children young because I knew from a young age that I didn’t. Both of those things are okay. I’m not criticising the way this guy told me it wouldn’t work because we want different things in the future. I guess what I’m saying is it put things into perspective for me. And it happened years before I thought it would.

Suddenly, twenty-four felt old to me this week. Too old to not know what I wanted. Too old to not have it all figured out. But when I think about it, watching other people have kids, start families and buy houses… That can make it look like they’ve got it together. When in reality, we’re likely all just making it up as we go along. I wonder if anyone thinks I look like I’ve got it together.

Twenty-four seems too early, too young to have to stipulate that I don’t want children. But perhaps this is where I’m at now and sometimes that can be scary and worrying. This week I feel as though I’ve lost the ability to say “I’m ONLY twenty-four”.

In short, dating is so strange and terrifying. And dating at twenty-four is nothing short of a minefield. Maybe something will come from it, and maybe it won’t. But whatever happens, I’m going to be okay. And we are not flagging behind because you haven’t got a mortgage, you don’t want children, don’t yet have children, you’re single, dating but not married, or don’t drive. You are not flagging behind as long as you’re where you want to be. As long as what you surround yourself with makes you feel happy and fulfilled.

View all posts by ravensandwritingdesksandbooks 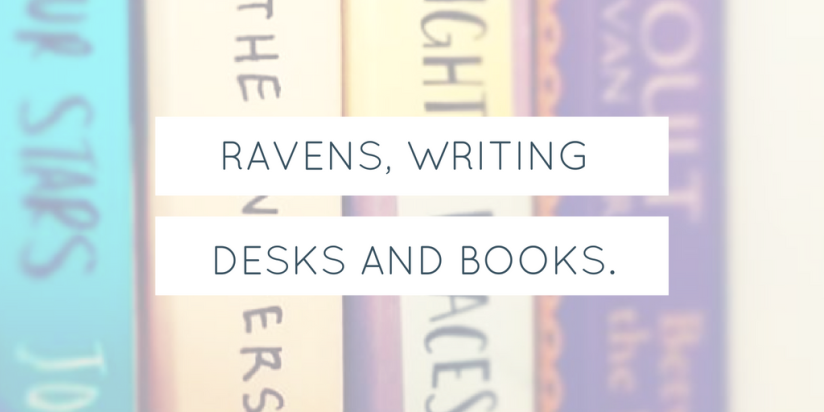 So I’m trying a new platform and have formed from Blogger, to WordPress. Expect more bookish ramblings, and ranting. Enjoy!

A Link to my First Blog